KK with Weird Al at the Calgary Expo, A++ Would Do Again 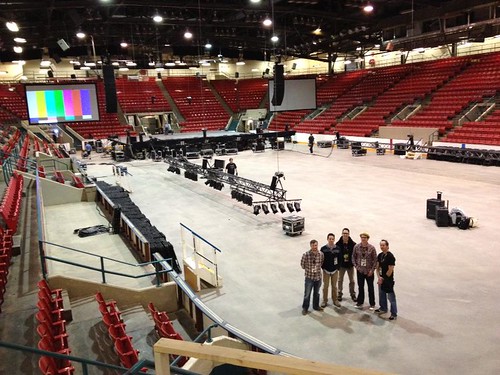 Lots of Kirby Krackle action happening these days. We opened for Weird Al Yankovic at the Calgary Expo in Alberta CA last weekend. So that happened. My wife put together a cool behind-the-scenes post with photos for you to marvel at. I'm grateful, because I had no time or means to document it all myself.

What's it like to play an arena of 4000 people? Not to downplay it, but a lot like any other gig, except with awesome sound and lights, a huge stage to play on, and you can't see the audience much because of the lights in your eyes. I will say it was a very comfortable experience -- almost as if, oh, I dunno, I totally belonged up there. As Kyle described it: "like bathwater." Actually, the whole band worked the booth the next day and I swear that was almost as much fun as playing the show.

(I did not meet Weird Al. Ask me again later.)

This weekend we're charging into Studio Litho to record the 4th Kirby Krackle album. In the meantime, you may be interested in this, the inaugural episode of KrackleKast, the podcast Kyle and I do while waiting for the rest of the band to show up for rehearsal. This was recorded before the Weird Al gig so we talk about our expectations, a little about songwriting and the new album, and then Kyle grills me about my past. My thanks to Matt, who indirectly encouraged Kyle by encouraging me to encourage Kyle, or something. We'll get better. I promise.