New music and stuff on the horizon 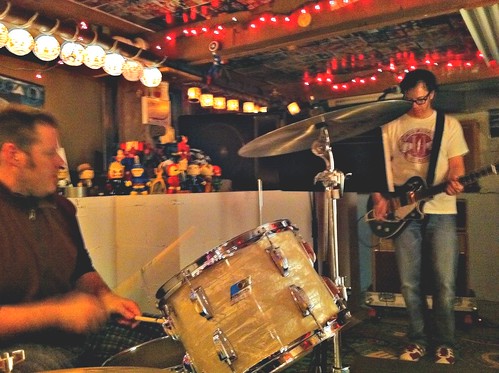 Stuffs To Which I Am Up in the coming weeks:

Explone (shown mid-rehearsal above!) are headed into Avast! studio in a few weeks to start recording the follow-up to Dreamers/Lovers, released last June. So far it's shaping up to be a 6-song EP. Patrick has also been working with Thor Radford (who created the cool video for "St. Yesterday") on a new video for "Complicated." We have a mailing list if you're interested in all things Explone-y.

Kirby Krackle is performing this Saturday as part of the Emerald City Comic Con, at the Hard Rock Café near Pike Place Market. We're sharing the bill with H2Awesome and nerdcore rapper Adam Warrock, both on loan from NYC. James Marsters (you know, Spike from BTVS) is also performing a private show right before the event, which we've dubbed, with great humility, KRACKLEFEST. Tickets are on sale here!

My unnamed, secret songwriting project may still be a secret but is no longer unnamed. Not only have we chosen a name, but secured the .com domain, Twitter, Gmail and Facebook usernames! What? Music? Oh, right. We're currently recording demos of the songs written so far. And we're going to play an incognito show at an undisclosed location in the next few weeks and see if anyone visibly cringes when they hear the songs. (And in true cart-before-horse fashion, I'm already dreaming up videos and t-shirt designs.)