This is an archived blog post that was posted on February 19, 2021. 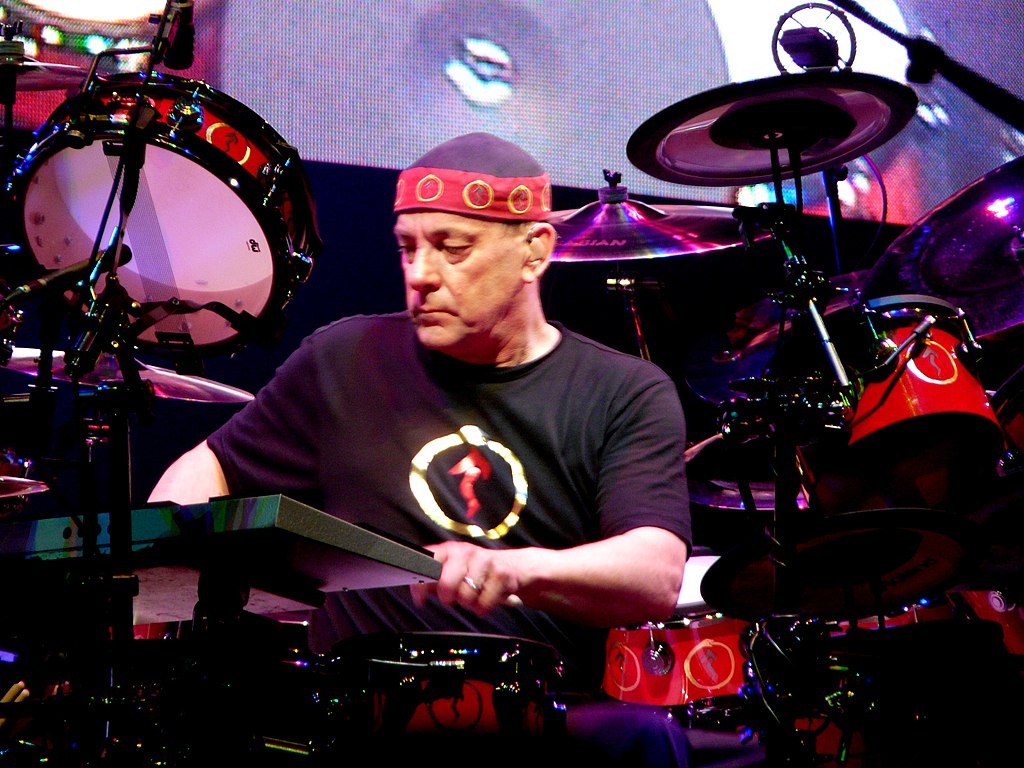 It's been roughly one year and one month since Neil Peart passed away, and at the time I didn't know what to make of it, so I didn't write about it here.

I do know exactly where I was when the news reached me. I was at my job, in one of those soundproofed one-person cubes meant for making phone calls or distraction-free work. I was preparing for a meeting, and was closing browser tabs when I saw the headline: Neil Peart, drummer for rock band Rush, dies at 67. I sat there, dumbstuck for a second, before my next thought: welp, I guess this is how I'll remember this moment: Neil Peart is gone, and I have a meeting.

The first rock show I ever attended was Hüsker Dü at the Syria Mosque in Pittsburgh, 1987. After that, my first arena rock show was Boston's Third Stage tour at the Richfield Coliseum in Ohio.

My second arena rock show was Rush. I'd made a handful of new friends at college and one of them had a ticket for the Hold Your Fire tour. Styx guitarist Tommy Shaw was the opener, touring his solo album Ambition.

I didn't really know Rush the band at all back then, although "Tom Sawyer" existed in the background radiation of my high school years, and I sorta-kinda recognized "The Temples of Syrinx" during the encore. I had a lot of "oh, so that's the band that does that song" moments.

Anyway, I mostly remember the laser light show and cool video backdrops. Later I would buy a cassette of their live album, A Show Of Hands, and was hooked.

Actually, my first memory of the band was hearing "New World Man" on the radio, likely in 1982 when it peaked at #21 on Casey Kasem's Weekly Top 40, when FM radio was the cultural kingmaker. I was 12 years old.

Also charting that same week: "Truly" by Lionel Richie, "Heartlight" by Neil Diamond, "Jack and Diane" by John Mellencamp, "Southern Cross" by Crosby, Stills, and Nash, "Rock This Town" by The Stray Cats. It was a different time.

Cleveland loved Rush. The song "Working Man" from their first album was embraced by a local station and that buzz helped them secure a record deal. But the Cleveland music scene hated Rush. Local music press wrote scathing reviews of their albums and concerts. The lyrics were too literate, they lacked passion, the playing was too proficient.

This was when the scene was leaning hard into the authenticity demanded by the grunge and alt-rock era. Oh, you know more than three chords and have a decent relationship with your dad? Move along, poser.

We lost. To express no hard feelings, we helped the other band load out their gear. I suspected they were feeling a bit righteous having defeated us: a few months earlier I had auditioned for their band, got the job, then backed out to form my own band. Feathers were ruffled. Because we played similar music, we competed for the same prog-loving audience — the audience that listened to Rush.

A few years later, at one of our last concerts, we invited their keyboardist onstage to play "Subdivisons" with us, splitting vocal duties. The crowd went bananas. Rift healed!

In hindsight, naming our band "Anagram" didn't make things easier on us.

My first "real" band was a six-piece playing covers. Standard early-90s college fare: R.E.M., The Cure, Pink Floyd, U2. And also, Rush. One night our lead vocalist decided to go on a date instead of coming to rehearsal. That night, without our singer, we ended up adding three more Rush songs to our set.

The next day our singer found out and was pissed off. He didn't hate Rush, but did we really need more Rush songs?

He ditched us for a date! What were we supposed to do?

I picked up some 70s-era Rush albums on cassette, blasting them in the car on my way to and from my summer job at the can factory.

I could not believe this was the same band I had seen my freshman year. Where were the synthesizers? Why do they sound like Led Zeppelin? Why does the drummer sound like Keith Moon on hyperdrive?

Wait, the drummer writes the lyrics?!

One late summer night I listened to the Hemispheres album for the first time, with headphones while laying in bed. The title track, formally named "Cygnus X-1 Book Two: Hemispheres" is an 18-minute long sci-fi rock opera. Because what else would it be?

When it ended, I sat up in bed and quietly applauded to no one.

Somewhere buried in a milk crate downstairs is a cassette with a boombox recording of my first band playing "La Villa Strangiato" at an outdoor house party during a humid summer night in Ohio. It was my first gig, ever. We called ourselves Fives and Sevens, after our favorite time signatures.

In all, I saw Rush live five times. Hold Your Fire was followed by Presto, then Roll The Bones. I camped out for tickets for both of those tours, back when camping out for concert tickets was a thing.

I wanted to like those albums, but I found myself not loving Rupert Hines' glassy production. Counterparts brought the band back to big guitar sounds and it was obvious that they'd been influenced by the return of guitar-driven rock to FM radio. The pre-concert stadium music included Soundgarden and Live. Primus was the opener.

I almost skipped the Test For Echo tour, but bought a floor ticket the day of the show. I hadn't bought the album so for the first time in awhile I was unfamiliar with some of the songs. I hadn't fallen off the bandwagon, but I had dropped the pace a bit.

How does an internationally-reknowned rock band with a career spanning 45 years not have a single noteworthy scandal? No outrageous womanizing, no exorbitant drug abuse, no "I'm a golden god!" moments to speak of.

From what I've seen — and mostly from the Beyond The Lighted Stage documentary — they were basically three goofballs who loved playing music together and made exactly the music they wanted to make and then made a career of that for almost five decades.

Just three friends who created something some people hated, but for which others would probably donate a pint of blood if asked.

When I was with Kirby Krackle, we had a running joke that Patrick and I had a not-so-secret mission to slip a Rush song into a set. Now that I think of it, we missed our chance.

At Kracklefest 2017, the band had to fill time while our leader Kyle changed into and then back out of granny drag for "Grandma's House." We ended up playing Led Zeppelin's "Rock and Roll," with Pat and I splitting lead vocals. What we should have played was "YYZ."

In the weeks after Peart's death, I listened to a lot of the band's catalog, including the last few studio albums I'd ignored, and rediscovering much of their music through the numerous live albums they'd released as the band wound down in the late 2000s.

Peart's passing meant the end of the band, and the end of something very personal to me. Yet the dominant feeling wasn't grief or sadness, but a strange, profound gratitude. Peart changed rock music, and I was grateful to have been there to witness it. I'm still grateful.

I had no idea. Neil Peart is gone, and I have a meeting.